With a total of 47 competitions at 24 venues, this season is shaping up to be one for the books as a healthy mix of classic slopes and new additions are sure to provide ample drama and excitement as the World Cup celebrates it’s 50th birthday this winter.

New this year will be the revival of the full alpine combined discipline. With three races on the schedule, who will pick up the coveted crystal globe at season’s end?

The White Circus once again kicks off on the familiar slope of the Rettenbach Glacier in Soelden, Austria, with an opening giant slalom slated for Oct. 25.

As the World Cup comes to Alta Badia, Italy, for its annual giant slalom down the famed Gran Risa slope, FIS has added a unique parallel GS to the weekend’s schedule. The first of its kind at the World Cup level, adding a parallel GS signals just how marketable the parallel format has become in recent years.

“Parallel races are good events, the younger generations like this format and by adding a PGS we are confident we can offer the audience a great and exciting product. This is not a new format, it’s an existing one and we believe in it,” explained men’s Chief Race Director Markus Waldner.

The men’s tour then remains in Italy for the remainder of the calendar year with the now regular Madonna di Campiglio night slalom taking place Dec. 22, and Santa Caterina replacing the traditional Bormio downhill for the second year in a row on Dec. 29.

Fans of the classic Bormio venue need not worry, as according to FIS, talks are ongoing to try to bring back the iconic Stelvio piste for future seasons.

After the New Year, racing gets underway with a parallel city event in Munich, Germany, scheduled for New Year’s Day, 2016.

The stretch of “Classics” begins on Jan. 9 in Adelboden, Switzerland, hosting the annual slalom and GS series, followed by stops at the legendary venues of Wengen, Kitzbuehel and Schladming before moving on to Garmisch-Partenkirchen, Germany.

In February, the World Cup will add some Far East flair with an inaugural stop in Jeongseon, South Korea, as a test event for the 2018 PyeongChang Olympic Winter Games, on Feb. 6 and 7 for downhill and super G races. The tour then returns to Japan for the first time since 2006 with slalom and GS races in Naeba on Feb. 13 and 14.

Racing resumes in Europe on Feb. 19 as Chamonix, France, finds its way back to the World Cup downhill schedule. After a quick detour to Stockholm, Sweden, for a parallel city event on Feb. 23, it’s back to Austria for the weekend with super G and GS races in Hinterstoder at the end of the month.

Drawing the year to a close, World Cup finals in fabled St. Moritz, Switzerland (site of the 2017 FIS Alpine World Ski Championships), will run March 16-20, where crystal globes will be awarded to individual discipline title winners as well as the coveted overall.

With stops in 15 different countries, this season’s action is sure to leave fans exhausted yet satisfied come winter’s end. So dust off your passports, pack your bags, and come tag along with SkiRacing.com for the 2015-16 season. 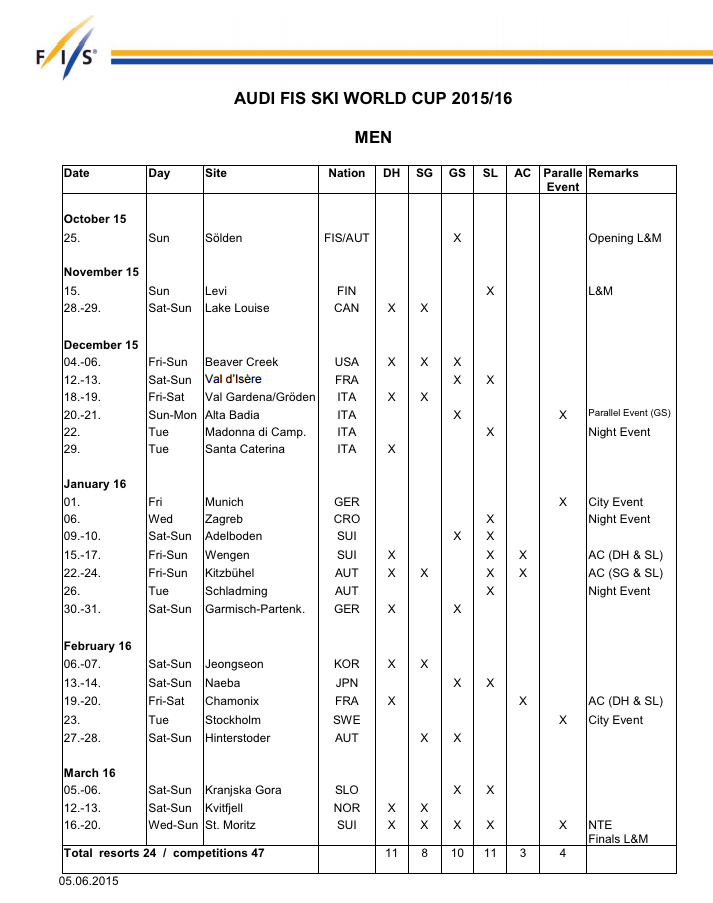