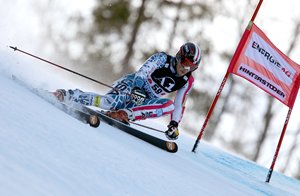 With a full day of training also on tap for the men’s team in New Zealand Friday (Aug. 19) Americans got a second place from Thomas Biesemeyer and a four in the top 10 performance in the first GS of the summer season at Coronet Peak. Swede Jon Olsson got the win by a significant margin (.62) with a brilliant second run. Canadian David Donaldson took third leading a group of three teammates into the top 10.

The American group followed up a morning of training before the races, including groups in slalom, super G and GS all running simultaneously.

“The hill was a bit soft today, but the crew did a good job to get off a successful race,” said men’s coach Mike Day. “Beisy has been skiing solid GS all camp and it showed today. We build our camp plans to include these races as part of our progression during the camp. The last days of the camp we also have the ANC races, so the intensity will be high and volume quite low.”
Other U.S. skiers pushing into the top 10 included David Chodounsky in fourth, Ryan Cochran-Siegle seventh and Jared Goldberg ninth. The Canadians had Philip Brown in sixth and Erik Read eighth.