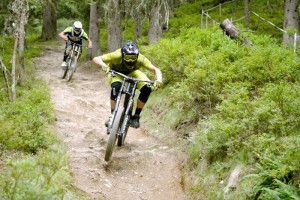 Mayer followed professional freeride mountain biker and friend Hannes Klausner through the Bikepark Wagrain in Salzburg, Austria, in mid September. The full program is set to air on ServusTV’s Sport und Talk aus dem Hangar-7 in Austria on Nov. 2 at 8:15 p.m. local time, but ski fans can get a sneak peek at Mayer’s biking skills in the video here.

Mayer was unable to start in the Audi FIS Alpine World Cup season opener in Soelden last week due to leg contusions sustained in a crash during super G training on Oct. 12, but he is optimistic for a return to ski racing in Lake Louise next month.