The men’s World Cup speed circuit touches down in Saalbach, Austria, for the first time since 1999 this week. The men haven’t contested downhill there since 1994 when Canadian Ed Podivinsky finished on top of the podium (and current FIS Race Director Atle Skaardal placed third) in a two-run sprint race after high winds forced a shortening of the course. Prior to that, Saalbach hosted the World Alpine Ski Championships in 1991.

This year’s installment will be held on the Schneekristall, which race officials hope will be skied to completion come race day.

“It’s a course with a ton of terrain — a lot of sharp terrain — so it helped to know where you were going in the first training run,” which the U.S. did not, said assistant speed coach Scotty Veenis.

Kjetil Jansrud opened the speed week the same way he’s opened many others this season — with the fastest time in training. The Norwegian clocked in at 1 minute, 49.62 seconds. 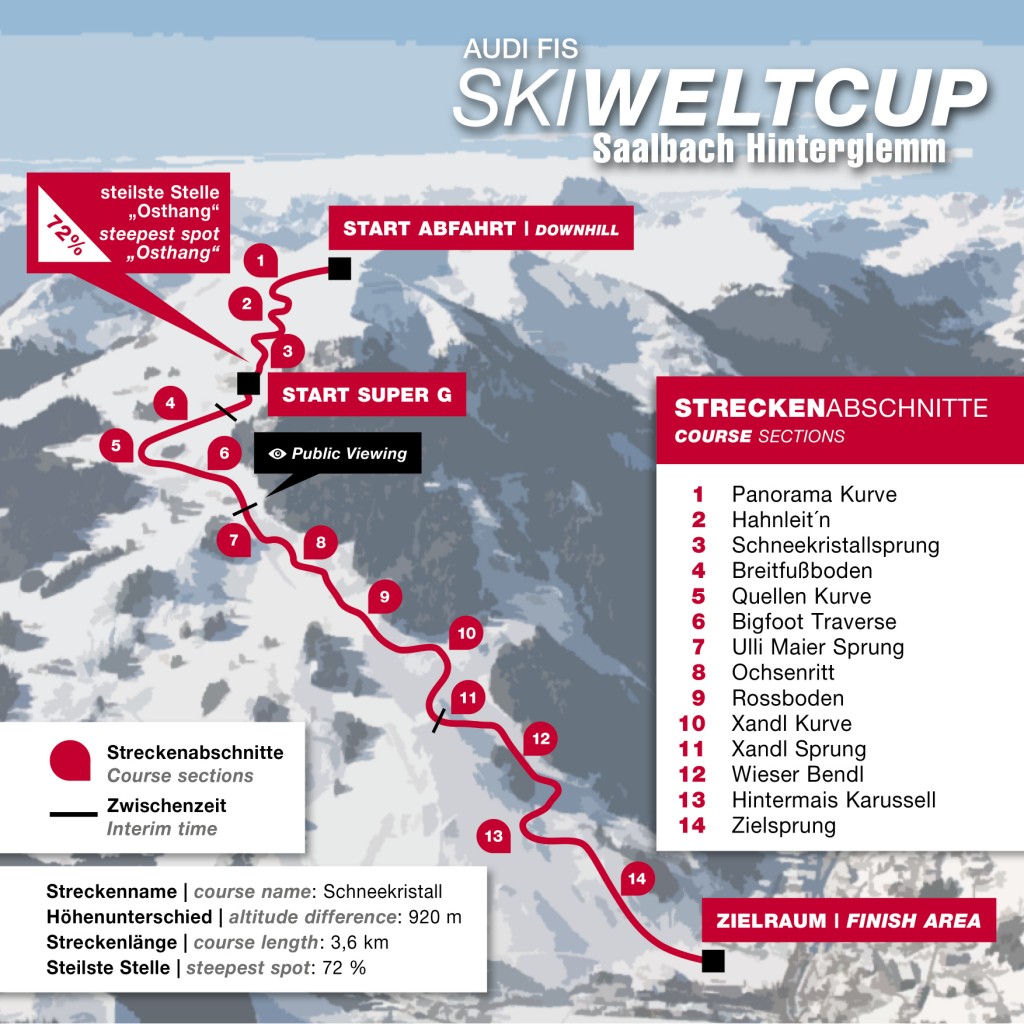 Jansrud was followed by six straight Austrians, starting with Max Franz (+0.09) and Matthias Mayer (+0.29). The Austrians who departed Colorado after the speed events of the World Championships were able to log some training time on the hill before the pre-race moratorium took effect. Likewise, Jansrud also had an opportunity to train in Saalbach prior to returning home to Norway for a bit.

The U.S. team had atypical results in the opening training run with most of the top speed skiers finishing near the back of the pack. Many of the guys missed gates and were simply hesitant — not totally sure how to execute the new course.

“The snow for the most part is in really good condition right now,” said coach Chris Beckmann. “There is a lot of really sharp terrain and decent jumps. So for the guys going into it blind, not even having been down the trail yet, it was kind of a learning experience.”

The course follows a gondola from top to bottom, beginning well above tree line and then dips into a forested section where the trail becomes quite a bit turnier, but not necessarily more technical, according to the coaches. The race concludes with good action on the bottom — a Daytona-style bank turn and a 60-meter jump over an Audi. (Yes, an actual Audi.)

“It’s something cool for the fans,” said coach Pete Anderson. “It jumps pretty easy actually, even though it’s big. The takeoff has got to be close to three meters, 10 feet off the ground.”

I don’t know if the course is necessarily going to suit one type of skier more than others,” added Anderson. “It’s going to take some good active skiing over terrain. I think anyone can be fast. It’s not super technical and at the same time there isn’t a long gliding section either. It’s just a lot of good, open downhill turns.”

On this, an entirely new hill for the athletes, the coaches said there isn’t much of a change to the team’s approach — try to capture some good video angles and analyze their training performances in advance of race day on Saturday.

The biggest difference is the learning curve. “You’re starting with no knowledge of the hill, so each training run has to count a little more,” said Anderson.

With the presumed success of the speed hill this weekend, the hope on the ground is that Saalbach can return to the calendar as a more frequent stop on the World Cup Tour.

“The people in this valley are really into ski racing, as much as anywhere in Austria,” noted Anderson. “They have a lot of interest here and they haven’t had a race in so long, they want to get get back in the game.”