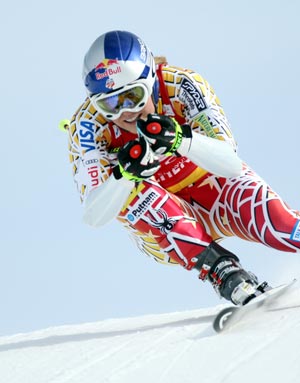 The U. S. Olympic Committee announced today (Jan. 25) that ski racer Lindsey Vonn has been named 2010 Sportswoman of the Year for the second year running.

“The 2010 Olympic season was incredible, but what made it so special is that I was able to share it with so many American fans,” Vonn said. “It was amazing to see the support and excitement they showed for ski racing and that’s definitely carried into this winter. It means so much to the athletes to hear from them. Win or crash, they keep us excited to compete.”

“All of these athletes represent the best in Olympic and Paralympic sport for Team USA,” said USOC CEO Scott Blackmun. “Their excellence on the field of play is matched by their positive influence in their communities and across our country. Their personal achievements last year and throughout their careers are remarkable, and I am thankful that we have such outstanding ambassadors of excellence.”