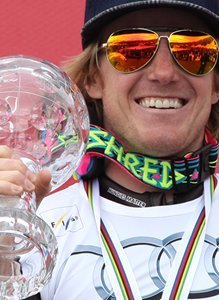 There’s a lot of talk out there right now about the new FIS ski
regulations to be implemented in 2012- most specifically the GS radius
minimum. I’ve spoken out against the new rules which include a new
guideline stating that GS skis cannot be less than 40 meters in radius
(whereas the current rule is 27m). I have even joked that Michael Von
Gruenigen and Alberto Tomba were going to come out of retirement and use
their old skis. Although, there is just one problem with that- their
skis from the 90’s wouldn’t be legal.

For the past 17 years, GS ski radius hasn’t changed much. In 1996,
World Cup racers were skiing on skis with a similar radius to today-
with a 28 m radius. Three years earlier, in 1993, Rainer Salzgeber, the
Head Race Manager who raced in the 90’s, said he raced World Cup on
skis with 32-meter radius. To give you context of the times,
“Schlinder’s List” and “Sleepless in Seattle” were in theaters and the
first President Bush was handing over the keys to the White House to the
newly-elected Bill Clinton. You would have to go back to the 80’s to
find 40 meter radius skis. That’s the radius FIS wants everyone from me
to 15-year old boys to be racing GS on. Wave good bye to the sport’s
progression of arcing the cleanest possible turns. 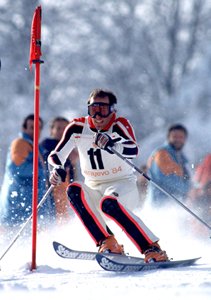 I write this article now because today I finally had the chance to
try a prototype of the 40m GS skis. And quite frankly, they suck. I felt
like Phil Mahre circa ’84. Try as I might, I could not get the skis to
come around without a huge slide and step. Warner Nickerson also tried
them in the course. As I watched him fight his way down through the
course, I could only think about how much the scene reminded me of the
silent black and white films from the early days of skiing. At the
bottom of the run, Warner said he was worried he was going to straddle
every gate because the tips were so long. To have any chance of making
the next gate, he had to go recklessly straight and then awkwardly
slide. Might I say ‘dangerous’?

There has been a lot of talk that ski racing has gotten too
dangerous. Leading that discussion is the sport’s international
governing body; yes, of all people, FIS. The truth is, ski racing is a
dangerous sport: always has been and always will be. And don’t get me
wrong, I’m all for safety and taking the precautionary measures to avoid
needless risks. But when I ask myself if GS is “super” dangerous in
the relative sense of things, the answer is NO. In the last two years,
there has been a grand total of three injuries among the skiers of the
GS elite (ranked in the Top 30); and I wouldn’t contribute any of the
causes of these injuries to the equipment. For example, Thomas Fanara
tore his ACL in Beaver Creek in ’09 because the gate panel
hooked/wrapped him in the gate then sent him flying (also note, the snow
conditions were that very grippy man-made snow); Marcel Hirscher broke
his ankle due mainly to poor hill preparation (he was running #2 and
there was a huge unmarked hole in the ice that he stuffed his foot into
at full speed); The third injury of the past two years was Benni
Raich’s ACL tear that happened racing in a dual in which men and women
were running the same course (men and women ski a different line
resulting in a sharp grove at the bottom of the turn which caught
Benni’s ski twisting him up and not letting him release the energy out
of the turn). If you ask me, three injuries in two years is an acceptable
level of danger- especially considering equipment was not at fault.

Unfortunately, I don’t remember the era of 40-meter skis very well so
I cannot provide good examples of GS skiers hurting themselves based
solely on the radius of the ski. But I do remember greats from the era
like Marc Girardelli, among others that had countless numbers of
injuries skiing on the straight skis. FIS should be reminded that
racers have injured themselves in every era of the sport and chances
are, they will continue to do so. When you have a 195cm, rigid lever
firmly attached to your foot, there is a good chance of hurting yourself
if you fall, no matter the sidecut or radius.

FIS claims that slowing down the racers (via drastic equipment
modification) will make the sport safer. But the reduction in speed
when using longer radius skis is inconsequential. When you crash,
what’s the difference if you are going 90kph or 80kph or in downhill,
140kph to 120kph? Plus coaches are now going to set straighter because
of the new rule changes so speed/danger really won’t decrease anyways.

It should be noted that FIS doesn’t exactly have the best track
record in making smart, safer equipment rules. For example, just a few
years ago FIS lowered stand- height and widened the skis- putting more
force on the knee and body which resulted in more injuries. Narrower
skis would have been the right move in that instance and is the only
part of this new round of rules they got right.

If you want to slow down the sport then don’t allow tight suits and
make us wear normal ski clothes like skier-cross- I don’t like wearing
my race suit anyways. Another idea is to make an off set rule for GS so
that courses are set with rounder turns.

I obviously must seem very biased when it comes to GS rules since
things have gone very well for me in recent years. And to be honest, if
the rule changes truly were safer and wouldn’t ruin the sport, I’d be
all for them even if it were to my disadvantage. But from where the new
rules stand now, I don’t see any added benefit to the interests of
skier safety. If anything, I fear these new rules will drain all the
fun out of the sport and will deter future generations from picking up a
pair of race skis when they head out to slopes. Ski racing is a unique
sport in the way it balances of finesse and well-rounded athletics.
From my and Warner’s experiences skiing on these new skis, the new rules
will favor brute strength and size, think Aksel and harm smaller
athletic skiers like Fanara and Hirscher. I hope these proposed rule
changes are just a ploy by FIS so they can say they made an ‘attempt’ to
make the sport safer. Otherwise, I better dust off those Sarajevo
Olympics VHS tapes and start studying that legendary Phil Mahre and
Ingemar Stenmark step.