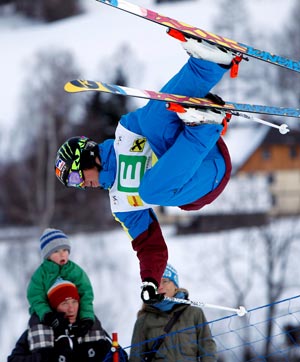 The U.S. Ski and Snowboard Association (USSA), today (Jan. 25) announced the formation of a new sport program, U.S. Freeskiing. The new athletic program, parallel to the organization’s well-established U.S. Ski Team and U.S. Snowboarding brands, will encompass the potential new Olympic events of halfpipe and slopestyle skiing along with skicross, which made its Olympic debut in Vancouver.

The rapid progression of freeskiing and an active approach by the International Olympic Committee (IOC) to consider new action sports for the 2014 Games led the USSA to create a new brand around the sport of freeskiing. With millions of participants, the sport has also attracted a new partner with the USSA announcing an eight-year alliance between The North Face and U.S. Freeskiing.

“The establishment of U.S. Freeskiing is an historic evolution for the USSA and an affirmation that the athletes in this sport require a unique management direction,” said the USSA’s Vice President, Athletics Luke Bodensteiner. “The creation of U.S. Freeskiing allows us to more effectively implement events and programs for freeskiing athletes as the sport grows within the Olympic family.”

“Freeskiing is a distinctly different and growing segment of our sport. Millions of young skiers worldwide are being drawn to this new genre of skiing,” said USSA’s Chief Revenue and Marketing Officer Andrew Judelson. “The North Face has a heritage steeped in pushing the boundaries of the imagination and athlete potential, aligning perfectly with our U.S. Freeskiing concept. It’s gratifying to see the enthusiasm within the IOC in recognizing that these are the activities attracting kids to our sport.”

The concept for the new U.S. Freeskiing brand, developed over the last 18 months, incorporates significant input from athletes, industry leaders and other partners as well as work by the USSA to move the new sports through the international process. The brand collateral, logo, and associated branding is expected to be unveiled in the Spring.

As a part of development of its new U.S. Freeskiing brand, the USSA has added freeskiing to several of its key national events. In December, halfpipe skiing was added to the Visa U.S. Halfpipe Grand Prix in Copper Mountain, with the Colorado resort extending its schedule through Dec. 2014. Skicross, along with halfpipe and slopestyle skiing were also added to the four-stop U.S. Revolution Tour, which now features both snowboarding and freeskiing with stops in Copper Mountain, Mt. Hood Meadows, OR, Boreal, CA, and Mt. Snow, VT. The North Face will be a partner at each stop of the tours. Skicross has also been added to the USSA’s national Hole Shot Cross Tour.

In October, the IOC’s Executive Committee gave an encouraging nod to a host of new Olympic action sports events including halfpipe and slopestyle skiing. A final decision will be made by IOC President Jacques Rogge after a review of the events in World Championships this season, including the International Ski Federation’s Freestyle World Ski Championships at Utah’s Deer Valley Resort and Park City Mountain Resort Feb. 2-5.