Home Top Rotator Mark your calendars: The 2015-16 women’s World Cup schedule is out

Get ready to mark your calendars as the women’s FIS Alpine World Cup schedule for the 2015-16 season has been released. It’s highlighted by World Cup finals in St. Moritz, Switzerland, the site of the 2017 World Championships.

The schedule hits all the regular stops on tour for the women beginning with the opening giant slalom in Soelden, Austria, on the second-to-last Saturday in October. They then make their annual slalom stop in Levi, Finland (where the ladies get to test out single pole slalom for the circuit), before heading stateside for GS and slalom in Aspen over Thanksgiving weekend.

Lake Louise will yet again play host to the opening speed races of the winter, giving Lindsey Vonn three chances (in two downhills and a super G) to add to her impressive record on the Men’s Olympic Downhill Run. Once the North American tour wraps up, it’s back to Europe for the remainder of the season.

France will hope for more early season snow than last year as they host the women in Val d’Isere and Courchevel before Christmas break. Val d’Isere hosts the first of four alpine combined races on the schedule, a year after the women only competed in one during the World Cup season. In total there are 10 slaloms, the most of any event, nine GS races, nine downhills, eight super Gs, and three parallel events.

Despite not having enough snow for the past two seasons, the Munich City Event remains on the schedule for the first of the new year, with high hopes of pulling the event off this time around. An additional parallel event was added in Stockholm on Feb. 23, and finals will again run a team event.

There are two first-timers on the schedule: Jasna, Slovakia, and La Thuile, Italy. Neither have ever hosted an alpine World Cup event before. Slovakia, with slalom specialist and World Cup winner Veronika Velez-Zuzulova on the home team, will run a slalom and GS, while La Thuile will pick up events on the speed side with a downhill and super G, respectively.

The women also return to Ofterschwang, Germany, for the first time since the 2013 season and Soldeu, Andorra, which has only ever hosted two previous World Cup races, a slalom and GS in 2012. 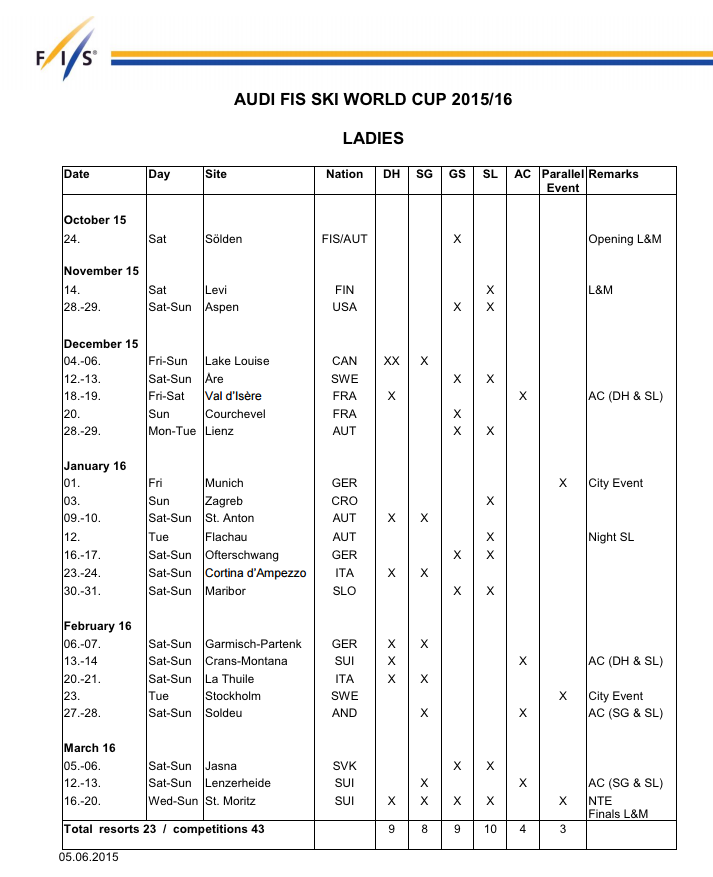