Home Topics Domestic No sticker, no start: U14 and older athletes need this FIS helmet...

Most everyone in ski racing has become accustomed to changing FIS regulations on gear, but this year it’s become a little trickier. In the past, FIS regulations have changed with the coming year’s skis but this time it’s alpine helmets and the new rule will be applied all the way down to U14 USSA racers. Unfortunately, just because you bought your helmet recently, that doesn’t mean it’s necessarily legal for competition in the U.S. this year.

All U14 and older athletes competing in both scored and non-scored giant slalom, super G, and downhill events must adhere to the new helmet rule. This means that if your 12-year-old son or daughter got a sweet deal on a helmet at summer camp, it might not make the cut. But FIS athletes were subjected to this rule last season and all juniors were recommended to do so as well during a multi-year phase in plan, so it didn’t just fall out of the sky. (Important update: The original version of this article indicated that Masters racers would also be subjected to the new helmet rule, but both the FIS and the USSA decided this month to waive inclusion of Masters athletes for one more year.)

How serious is it? 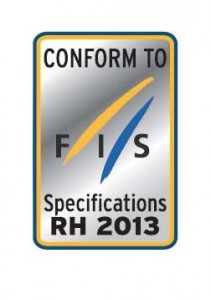 Officials at USSA and FIS GS, SG, and DH races for U14 and older athletes will be following a “No sticker, no start” policy, meaning if an athlete shows up without a FIS-approved helmet as indicated by the required conformity label (see image at right), they can be denied a start or sanctioned after their run. The sticker must read, “Conform to FIS specifications RH 2013.” If it appears that the helmet is unsafe or a counterfeit sticker is being used, the helmet can be confiscated, sent off to be examined, and eventually returned to the athlete. No sticker is required on helmets for slalom races, but helmets are still mandatory. For U16 and U14 athletes in countries outside the U.S., this rule does not apply to FIS children’s events this year but will in 2016-17.

What you need to do:

Do your research – check your helmets to make sure they have the exact sticker required by the FIS. Nearly all major manufacturers include a phrase similar to “Approved according to FIS RH2013 rule” in the technical specifications for their approved helmets. The new test procedure was conducted at 6.8m/s (higher than the old standard), so some manufacturers will also say their products conform to the FIS 6.8 rule. Briko even named its approved helmet the Vulcano FIS 6.8.

Don’t just assume your helmet will pass. Make sure you have the exact FIS label as other certification stickers from various organizations may also be on your helmet that do not meet the necessary standards.

The testing standards were increased which forced helmet manufacturers to design models to conform to more stringent parameters.

“They’re dropping the helmet at twice the velocity but the impact rating stayed the same, so the only way to make that work was to make the helmet a bit thicker,” said POC Managing Director of North America Willie Ford. “But that’s good. It’s like suspension in your car, because the more suspension that you have in your car, the smoother your ride is going to be. So all we did was extend our suspension a little bit.”

While this rule change means athletes will spend more money on helmets, USA FIS TD Commissioner Paul Van Slyke was adamant that financial gain for helmet companies had nothing to do with the decision to implement the rule.

“The decision was purely based on the fact that it’s a better quality and higher standard helmet available and the sport committee clearly felt that if there is a higher standard, then we need to be setting the example in sport with our regulations. This had nothing to do with it being a boon for helmet manufacturers,” noted Van Slyke.

With the winter coming in just a few short months, most families that don’t already have FIS-approved helmets are looking at shelling out another $120-200 per head this season, which could become a significant expense for larger families with several ski racers.

Juniors will be wearing helmets that are held to higher standards. Perhaps your helmet was dropped or took an impact that compromised its integrity; this new standard will help weed out those helmets and will prevent the resale of old compromised helmets as well. In the grand scheme, spending more money on a race helmet could prove to be the most worthwhile investment for parents.

“We’re trying to accomplish having all the kids in the best equipment possible that’s made for our sport, and this is what that standard is. If it helps one kid to not get a serious brain injury or death as a result of a better quality helmet then that’s a win for us,” added Van Slyke.

One other rule change:

Though more critical for ski clubs and less so for individuals, the new gate diameter and stand height rules announced in May are still in effect for 2015-16. Reliable Racing President John Jacobs has some advice for clubs that are looking to make the transition a bit more affordable.

“First of all, don’t throw away your 27mm poles that have been broken at the top because they can be recycled and turned into junior poles very easily and very inexpensively. The rules clearly state that all the poles on the hill need to be the same diameter and stand height. Don’t think that you can mix in 25 and 27mm poles, short gates and tall gates. They’re really looking for consistency, and that’s a fairness issue. Additionally, there’s an opportunity for those clubs that are on a fixed budget to recycle existing inventory and convert it into a junior pole. If you’ve got a bunch of shafts that are broken in the middle and you’ve still got the hinge, you don’t need to go out and buy a whole new slalom pole. You can just buy just the shaft and put it on the hinge while still achieving the 60-inch stand height,” Jacobs said.