Blake Lewis looks back on 1984, Bill Johnson and a lifetime of tech work

It’s a truth universally known that behind every great ski racer is a great tech. But there have been few greater techs than Blake Lewis, the man who, while working for Atomic, broke the European glass ceiling of ski servicemen on the World Cup downhill circuit.

Perhaps best known for Bill Johnson’s 1984 campaign — a dream season, a perfect storm upon which the press swarmed — Lewis moved on, and became a mentor to the other men and women who toil behind the scenes of gold-medal runs. Now, in this exclusive SkiRacing.com interview, he shares some of his stories.

SkiRacing.com: When and how did you get started in racing service?

Blake Lewis: I was a kind of a wanna-be ski racer, and there was a part-time job at Atomic, and I was doing Atomic pro sales at Squaw and Alpine. They were looking for an American to help out with their pro team back in the late 70s. The boss tech back then was named Helmut Langwallner, who was probably one of the best techs ever. He kind of broke in brushing and stone-grinding. He and I hit it off pretty well. Then he said, “Alright, now you come back with me to Austria.” And from there I went through the whole thing, apprenticeship, through journeyman to master. It’s super involved in Austria; it’s not just how you file — you go back and watch the plastic being made for the bases. You go to the forest and watch the trees being cut before they are peeled and skived. And then into plywood and then into cores. It’s a pretty involved deal. It’s a whole profession over there. 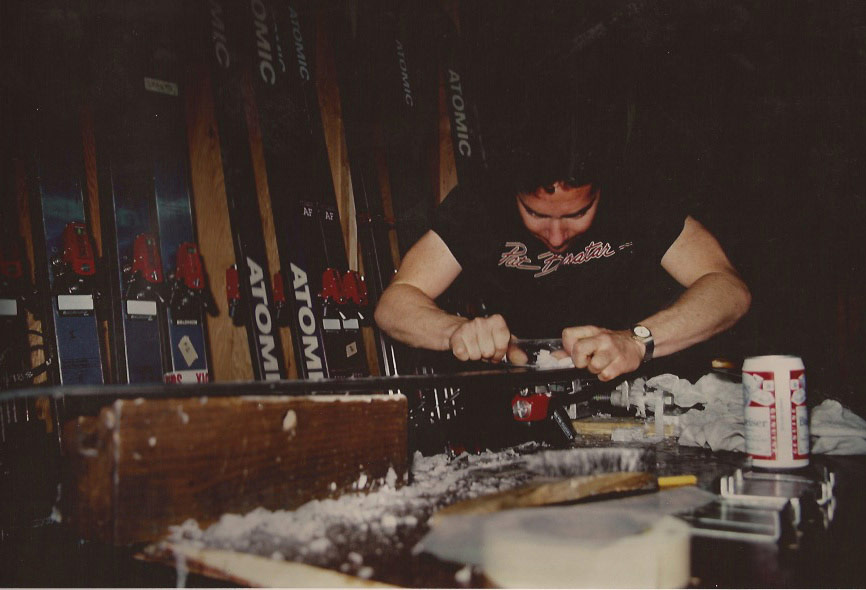 Blake Lewis hones his craft as a young apprentice.

SR: What was your background in ski racing?

BL: I was a ski racing punk out of the Far West. I had dreams of making the national team. I was fortunate enough to race the CanAm series, the Roach Cup, the Jackson Hole downhill. I also went to Europe and had good point results in downhill in some FIS B races, and a few Europa Cup races. But I never really broke through.

SR: How did you end up working with Bill Johnson?

BL: I was already working for Atomic as a factory tech, and they would send you to the athletes that needed service. I had been with the World Pro Tour, working with Andre Arnold. Andre was World Pro champion for a few seasons. Late that spring, I did some service for speed skiers Franz Weber and Steve McKinney. After that, Atomic joined the U.S. Ski Team pool. I was sent to take care of the men’s speed team, which included Bill Johnson. 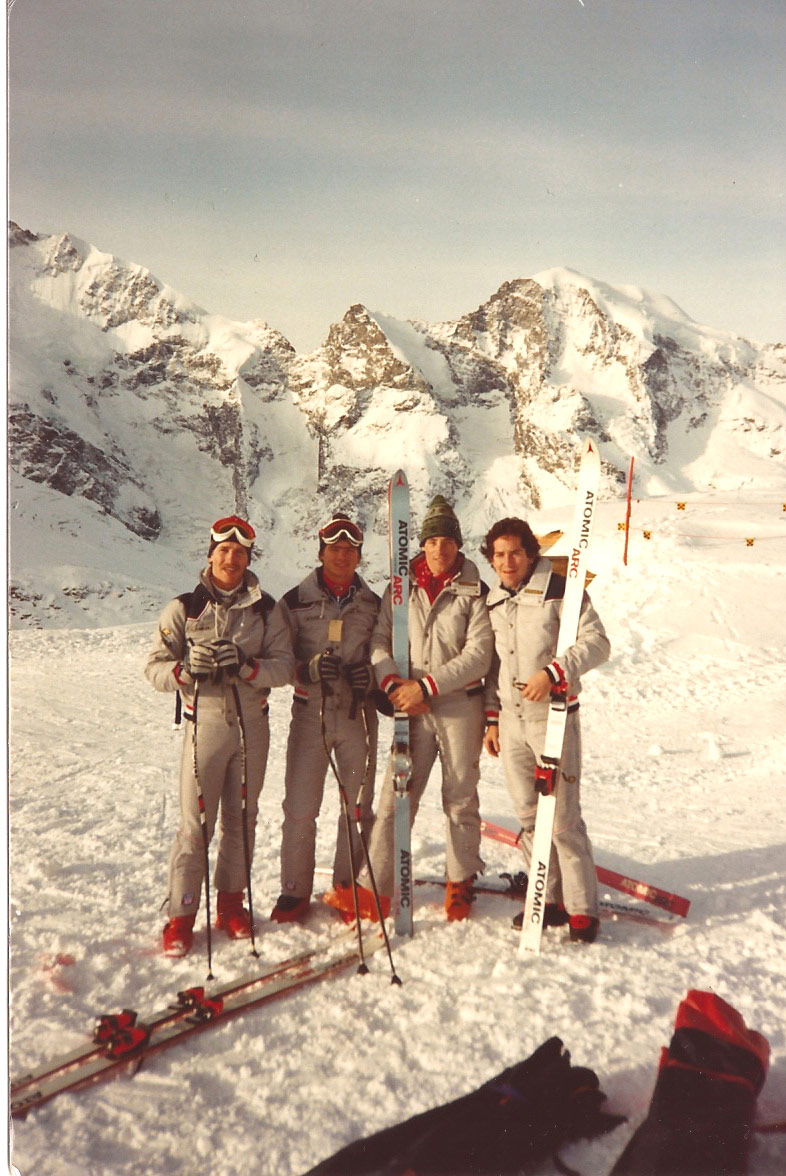 SR: Who were the other athletes on Atomic that you were providing service for?

SR: What was it like to be the lone American serviceman working on speed skis for Atomic?

BL: I was super fortunate because of Helmut Langwallner; I was treated like just another factory guy. I made the effort to be there from early in the morning to late at night. 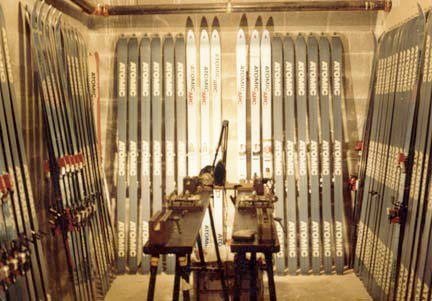 SR: Did you speak any other languages before you started working in the ski industry?

BL: The only words I knew in German were goldfisch and gesundheit. Helmut said, “You need to learn German, you are speaking this language, and you are speaking the dialect.” So I learned the Austrian dialect. After a few years, I was fluent. 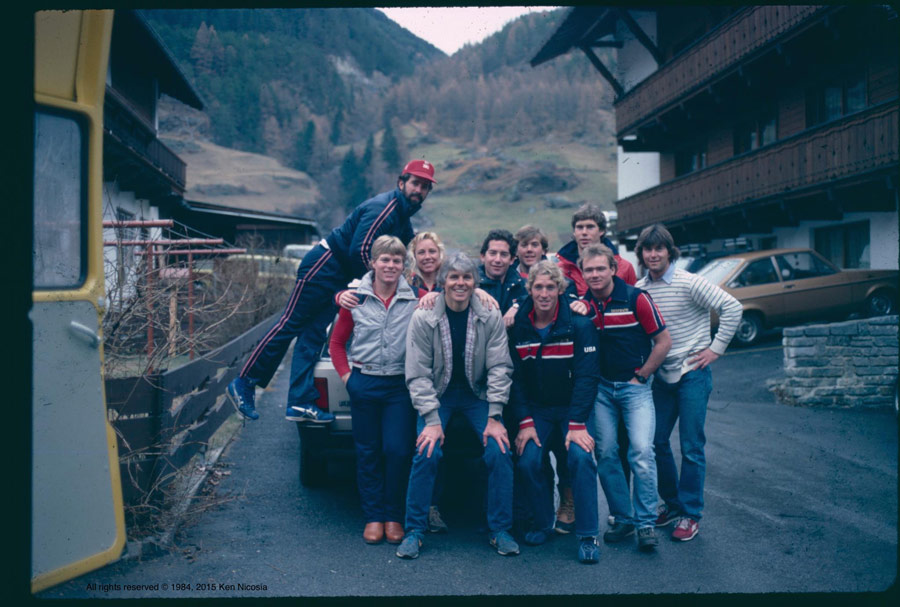 SR: Did you feel increased pressure as Bill Johnson began to have success in the races before the Olympics?

BL: I didn’t really feel the pressure; the energy was just going that direction. I knew I was doing the absolute best I can; I only had one guy at the Olympics at that time. I knew I had done everything possible working with Bill, and on his skis.

SR: Did Bill’s quotes in the press change anything that you were doing or how you had to work?

BL: I had an advantage in that I spoke Austrian; I could tell Bill what other competitors said about him in the paper to motivate him. I had the advantage of going into my world. I went into my wax room and got lost. They were long days, 14- to 17- hour days; there was not a lot of time for me to let the comments get to me. I look back now and realize that was the reason I was so protected. I could just go to my happy place in the wax room. 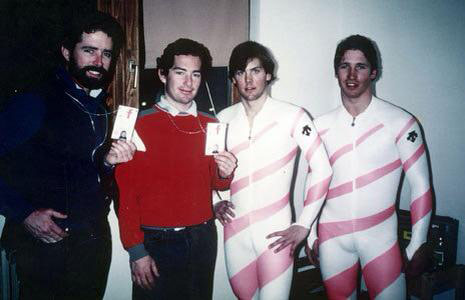 SR: Are there any tricks that you learned back in your time with Atomic that you could reveal to the SR readership?

BL: You define a process that works for yourself. You need to be able to repeat that, and be consistent with it. That’s really the trick. In Europe, there’s still this attitude of, “This is how it’s always been done.” I always took that as a great foundation, but I wanted to see how it could be done better. One time, a guy at Toko said, “I have this new stuff that no one will try.” I met him in a grocery store in Wengen, in the aisle, and he gave me the hand off. Bill won Wengen quite handily on that new wax.

SR: Did you feel that you were leading the Europeans with the techniques and practices that you were using to get Bill’s skis running so fast?

BL: That whole year, Bill’s skis were running fast. Even at the opening World Cup, he had fast skis. He didn’t do well, but he had fast splits. The other Atomic techs assumed I wasn’t telling them the truth about how I prepped the skis. The last race of the year was in Whistler. It was warm, I was going up the lift, and the shiv dropped oil on the ski. I get to the top, wipe the ski with a white rag, and the other Atomic reps say, “See, you never told us about that stuff.” 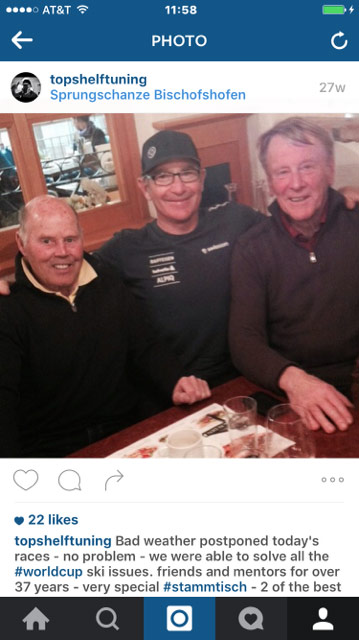 SR: You had talked about retiring after the “dream season” of 1984. Why did you keep going?

BL: I was going to stop after that year; I got a call from Atomic’s owner, Alois Rohrmoser, saying I had to come back another year. That was a hard year, I was still trying to approach things with the same mindset, whereas Bill was on a different program that year. His whole life was to be an Olympic gold medalist. He got that goal. He didn’t prepare the same way. Mentally, he wasn’t prepared the same way. So we didn’t mesh as well. He had a myriad of bad influences; he had a ton of great opportunities. I left Atomic in ’86 and went to K2.

SR: Anything that you would like to add to the SR readership?

BL: I feel really fortunate to have the experiences I had. They are lifelong experiences. The camaraderie that develops working closely with the athletes and the ski factories were some of the best times of my life.