As national teams begin to release their Soelden starting rosters, two notable names are early scratches from the Audi FIS Alpine World Cup opening giant slalom races scheduled for Oct. 24-25 in Austria. Swiss skier Carlo Janka and the U.S. Ski Team’s Julia Mancuso will both skip the first race of the 2015-16 season to focus on their respective recoveries from nagging injuries. 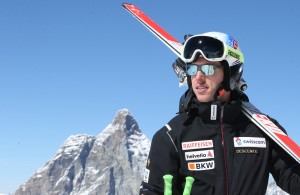 Janka had to take a training break several weeks ago due to recurring back pain. Despite recent improvements in his condition, last season’s winner of the Wengen alpine combined will sit out the GS opener in a cautious plan to better prepare for the opening speed races in North America.

“At this time, it would be unwise to interrupt my rehabilitation,” noted Janka. “I want to be in top shape for the beginning of the downhill season in November.”

Mancuso announced via Instagram earlier this week that she will not be in Soelden as she waits patiently to recover from a nagging hip injury that forced an early end to her 2014-15 season.

Still determined! #hurryupandhealhip!!!! Not going to be in Sölden????

Mancuso’s decision to skip Soelden is no huge surprise as the 2006 Olympic gold medalist in giant slalom completed only two GS races last season, finishing 17th at the Soelden opener and 26th at the 2015 FIS Alpine World Championships. In contrast, she was a regular top-10 finisher in downhill and super G during her abbreviated 2014-15 season and contributed to the U.S. podium sweep in Lake Louise.

Both the Swiss and U.S. teams are expected to release their starting rosters for Soelden as early as today.