The Eastern Region is tapping into uncharted territory. After getting the green light from USSA, the region has started a full-time athletic regional team that will operate like the National Training Group (NTG), only regionally. The group will consist of three post-graduate FIS-level girls for the inaugural season, with Mike Kenney serving as head coach. Kenney most recently worked with the men’s multi-team of the U.S. Ski Team, which primarily served Ted Ligety and Kenney’s nephew, Bode Miller.

The move is the first of its kind for the U.S. and Eastern Region Development Director, Eric Harlow, believes this is the move of the future for development in the U.S.

“The regional training team will keep more kids in USSA pipeline, but will keep them closer to home (as opposed to NTG). It will allow for athletes to train within their peer groups without having to move thousands of miles away,” said Harlow. “The NTG team has been really successful so we drew it up on that success, but regionally.”

Martin Guyer, Eastern Regional development coach, will act as an athletic director of sorts to oversee the project. Guyer will work to find ways to integrate the group with the rest of the region and use them for pace and competition with their peers. With Kenney coaching the program, the team will use Franconia Ski Club as a home base, but will have the flexibility to train elsewhere if needed.

“There is a real desire to advance and achieve. Pushing each other to new levels of performance in a competitive, focused environment and being part of a team is powerful,” said Guyer. “It can also provide peer group pace and mentoring for our next tier of project-based athletes when we expand the athlete roster for regional or national projects.”

According to Harlow, the idea arose from the athletes themselves who felt the need for more regional support in the form of a team. For this season the group will remain small and will only serve one gender — women (in contrast to the pilot USST National University Team which only includes men in its inaugural season). The three athletes who were chosen — and who accepted their nominations — through criteria approved both by the Eastern Region and USSA are Madison Lord (Burke Mountain Academy/Franconia Ski Club), Cecily Decker (NYSEF/NTG), and Anna Foley (Waterville Valley BBTS). Decker was a member of the NTG last season and was re-selected for the 2015-16 season, but declined in favor of the regional team in order to stay closer to home.

The NTG collects the best juniors in the country and strongly advises them to relocate to Park City, go to school and train at the Center of Excellence and on the slopes of Park City Mountain Resort, regardless of their home state. For athletes from across the country, the prospect of a regional team may prove to be very enticing. It is something that has been thrown around throughout the region and USSA for years, but never caught traction — until now. 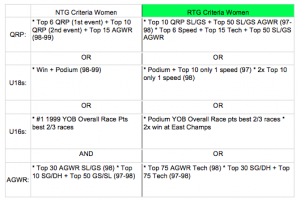 The team will copy the model of the NTG by providing conditioning camps, summer and fall training camps, and coaching and training at all times. The funding will be provided by the athletes during the first season. As the program moves forward year to year, more athletes being named to the team will lower the cost per athlete.

“We weren’t sure what kind of support we would get from USSA … for us it was critical to show that this was an initiative that USSA supported,” admitted Harlow. “They have been great and supportive and hopefully this can serve as a blueprint for other regional teams moving forward.”